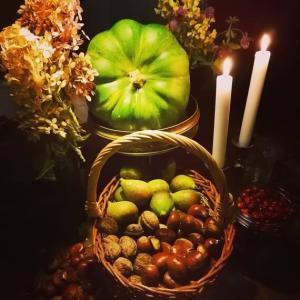 Foraging chestnuts in the local area, an activity that immediately sends me back to my primary school with its two majestic trees on its playground under which many a first took place, all heartwarming to reminisce but not very accountable educationally, though opinions may vary on that subject, we are bound to be not the only ones defying the rain to add to our already not insignificant greed, giving the squirrels a definite run for their money, but come to think of it they seem to be the big absentees this year anyway, no idea why, they were still thriving last year.

My aptitude for romance and rebellion has me naturally drawn towards the spiritual irony these giant trees represent, being the symbol of truth and justice, both of which are concepts nowadays weirdly open to interpretation. In his dystopian future novel ‘Nineteen Eighty-Four’ Orwell gives Winston his home away from home in The Chestnut Tree Cafe, a haunt of painters and musicians, subtly twisting the chestnut tree’s denotation to lies and injustice by letting it represent Winston’s betrayal of Julia and hers of him, and through it, everything they loved. Feisty stuff to muse about.

The same ostensible duality can be recognized in the way the French traditionally perceived chestnuts, prompted by location and lifestyle, in cities mainly associated with richness and decadence but for peasants in regions where the grain harvest was insufficient or non-existent a main and often only food, synonymous with indigence, derisively called the poor man’s meat.

Up until now we have mostly been lazy vegetarians, giving only light substance to our stilted mission of increasing our sustainability, using chestnuts as free firelighters and for the occasional roasting. That’s all going to change this year, underlining our utter wealth, when I dry and grind the foraged nuts into flour, expanding our dinner range into Chestnut Fresh Pasta with Walnuts and Mushrooms, Chestnut Fresh Fig Pie, Chestnut Hawthorn Jelly Pancakes, Chestnut Pumpkin Muffins and all the other firsts my mind is already raving about, expected to arise unforced, full of famished anticipation and hopefully heartwarming to reminisce afterwards.

Also consider reading  One of the most vitalizing aspects of sharing 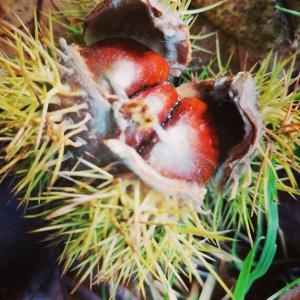