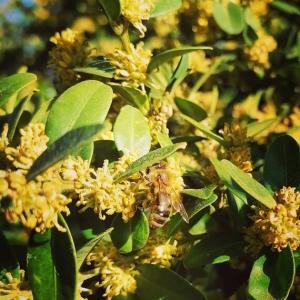 The previously quoted loudness of all the yellow that is suddenly surrounding us, our boxwood in full bloom more than a month too soon strikingly adding to its abundance, is permanently reinforced by the buzzling presence of all who woke early too and is in dire need of the food these plants are only too happy to supply, because it increases their chance of pollination. At the same time this is a questionable joy to watch and listen too, knowing very well how destructive it can be that not all aspects of Spring are uniformly moving earlier and frost could nip life in each and every bud.

It’s one thing to read about the major crack in Antarctica’s Brunt Ice Shelf, forcing a giant iceberg of more than 20 times the size of Manhattan, to split off, apart from its dimensions an entirely normal part of how things normally progress there, but a telltale nevertheless.
We are obviously not oblivious nor ignorant to what happens in the outer world, but up until now somehow being a fraction of this tiny universe of Les Pierres has made global warming a frightening thread, but mostly for the future, focussed as we are on the positive and glorious details we daily discover and discuss in amazement. This morning while observing the activity outside the cat cave I truly realized the natural calendar that guides all of our lives has already changed.

Also consider reading  Quiet and pristine in the veggie garden

Adding to that notion are the plumes of smoke appearing randomly in our landscape now that the time has come for our French neighbors to burn their excess goods and garbage. It might look like festive bonfires, some burning for days, but ever since we witnessed what the next-door family dragged out of their attic, we are very aware they certainly didn’t get the same memo as we did about real environmental concerns. We’re not completely informed about the law of the land, but are fairly certain science doesn’t agree.

Who are we to judge though, having just lost a car that disdainfully failed the pollution test, among many other basic criteria. Worse, I’d be lying if I stated that came as a surprise. “A new Spring, a new sound”, say the bees in their optimistic perseverance. And a new car, I dare to add, but promise to be mindful.