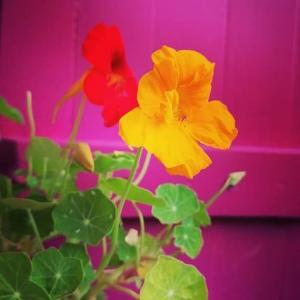 If I had not already given away the predicate of being my favourite or you’d be willing to forget I did, I’d be nominating our Nasturtiums as such. I guess they are used to playing second fiddle though, commonly being applied mostly as bug distractors alongside more precious vegetables. Sure, we like them but it’s okay if they fall into the clutches of aphids or the larvae of the Cabbage White Butterfly. Their purpose in life is to avoid a Brassica massacre.

While that’s probably the main reason there are so many of them this year at Les Pierres, I feel it’s selling them short. They are some of the easiest plants to grow with great value for effort, often thriving on neglect rather than care. Both their leaves and petals are packed with nutrition, containing high levels of vitamin C. They are delicious too: brightening up our salads, bringing into being a pesto to die for and infusing our spicy homemade vinegar. The poor man’s capers made from the still green seeds of nasturtium are even crisper and tangier than the real thing.

I however love them most for their bright and cheerful colours that bring me straight back to an apartment where I once lived, in an 18th century orphanage in the historic center of the Dutch city of Leiden. I designed this flat, even smaller than our current pink palace, by using 69 different colours on the 45 square meter surface. Somehow the sunflower bright yellow I used on the antique wooden ceiling worked really well with the dazzling orange floors and the amazing apple green walls in the bedroom. All of these colours had inspiring names like Revolution, Samphire and Full Sea.

The design (a huge success even if I do say so myself, but still never to be repeated) obviously faded years ago with new people moving in, bringing everything back to normal. All that is left of it’s glory days is a little stripe of skyish blue between a window and a lowered ceiling, barely visible and only from the outside. It’s name was Liberty, go figure.

Back at Les Pierres, someone should probably tell our nasturtiums to stay away from our shutters. It’s not going to be me. What can I say? Color coordination in all likelihood is an innate talent.