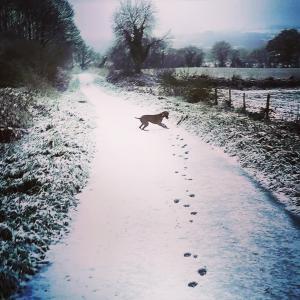 In this fairyland we proudly populate, footprints in snow not only depict the road we just walked, nifty like beknown breadcrumbs, but equally represent tell tale signs of treasures left on the trail. This years early snowfall, faintly greeted without ardor by all except Young Mec, who’s expanding enthusiasm is innate and has little to do with anything but pure and peerless lust for life itself, enviable and admirable only when he’s not driving the rest of us to devout despair, opened up an unexpected passage into the past, condensed in a casually shot picture of which I immediately understood its reveal to me, incorporating pattern and purpose.

Most of the time Mec is primarily looking ahead, not unlike me I might add, but suddenly coming across his own footsteps, now extraordinarily visible, for a split second sparked a curious interest in what a moment ago was still in the making yet its exertion instantly bygone. His impression was short-lived, obviously, his sense of smell drawing him back to a present filled with much more important deer, rabbits and bore, fences to jump and hunting grounds to actively chase. But that one look with which he affirmed its existence without ever recognizing it, offered my older heart hope and acquiescence. Run, boy, run.

The musings I write to incense our lives are the actual stories behind. I share them, initially without overthinking the correlation between image and text, as for me they always originate from the exact same mark. I do realize that social media grants much more power to image over words, which is why I also maintain a website to balance out this improper imbalance, but I admit to have been lazy and sloppy in its execution from the beginning, which made reading back no small task to figure out.

Mec, snow, footsteps and a rather nostalgic urge invited me to revisit and redesign this website to give introspection, intuition, emotion, spontaneity and imagination a more central stage, to become a true romantic again, enthusiastically hopping, stepping and jumping in my own formerly forgotten footprints.

The snow has almost melted, there’s rain predicted, but pattern and purpose are assuredly captured.