Secure a smooth integration into our new surroundings 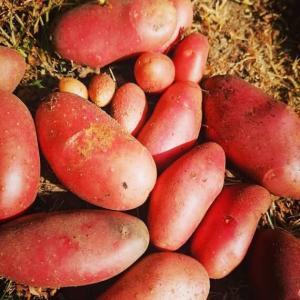 We had just laid out our new vegetable garden in the field next to our tiny house and we were about to plant it. Our nosy neighbour had been observing the entire process in increasing amazement, not able to figure out a familiar method in our manoeuvres. Every single day of garden activity he would come to the gate as to keep us under surveillance, hoping his gentle coercion would twig some doubt and win us over for his favourite crop to grow.

He himself would spend weeks preparing his plot by plowing it with his noisy machines, dawn almost till dusk, only interrupted by the classic French lunchbreak, so our no-dig-raised-beds strategy must have seemed alien to him. Our firm denial would make him withdraw, shaking his head in disbelief.

We apparently live in potato country, with a neighbouring village annually celebrating its existence in a grant manner during a festival that showcases hundreds of potato-varieties, exhibited in small baskets in the local park. This same village even has a small museum, a vivid evocation of the tuber’s country of origin Peru, with real pottery, figurines, scenes of everyday life and a miniature replica of the legendary little train on the mountain of Machu Picchu.

Little did we know not growing our own potatoes didn’t exactly secure a smooth integration into our new surroundings. We did make ample room for another South American member of the nightshade family, the Tomatillo or Mexican Husk Tomato, bearing small spherical green or purple fruit. With their taste in between tomato, cucumber, lemon and apple we favour them in salads or chutneys.

To make up for the lack of potatoes we offered them to our neighbours, probably estranging them even more. By now they have lost their interest in our endeavours.

Spring cleaning our pantry I found a bag of old, store bought, sprouting French Fingerlings and with our less waste policy at Les Pierres in mind I found them a home at a vacant, unplowed corner of the property. Having ignored them mostly, not expecting anything to come of them, we started digging for yield yesterday and were amazed by our beginner’s luck.

Have we been wrong all along? Don’t tell our neighbours!