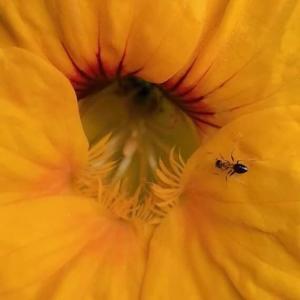 Living close to nature by literally reducing our physical distance to it, has made a great impact on our lives. Our knowledge about crawling, flying, jumping and sliding critters has increased enormously through chance encounters with outer-space-like insects, sometimes in places where you’d prefer not to have met them. The shower comes to mind, or inside the bed, you know, places you don’t want to share with anyone but your loved one, if at all.

For the longest time we have been fascinated by a sound filling the air around the sunsets we love to watch from our viewpoint, labeling the flying creatures responsible for it as helicopters, which their appearance in the air distinctively resemble. Only recently, after reading up on them, did we discover they are actually male Stag Beetles in search of a partner.

Their flying skills are not exactly to be called elegant and they seem to have a habit of crashing into the ground, making their numerous presence compete for our attention, while at the same time reducing the spectacle of the setting sun to an artsy ornament.Apparently in general they are rare and in some places even extinct, but at Les Pierres we are lucky to be able to provide them with enough rotting wood for their larvae to flourish, which means that each summer we are provided with free full evening aviation spectacles.

Their size is impressive but hardly a surprise, considering insects in France seems generally bigger than in our previous surroundings. Being terrified of wasps as a child, I’m sure it’s not hard to imagine my level of fondness of Asian giant hornets invading our home, forcing us to perform all kinds of strange antics to get them out again. I am quite ashamed to admit I prefer death in these matters and am only not committed to carry out that sentence because my fear of failure overrules.

I lack any scientific evidence for a thesis that something is magnifying these insects unnaturally, but the thought alone undeniably leads to a newly found appreciation for the smaller life forms out there. Never thought I’d say this, but I truly love ants.

Also consider reading  It’s been a wonderful experience all along

PrevLiving a fairytale life in a fairytale house
What if I’m at my supreme best now ?Next