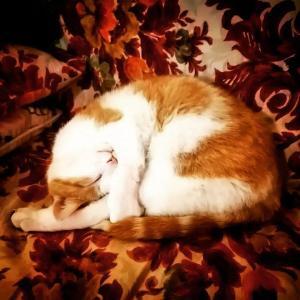 There’s only a few indications as to what got him into trouble in the first place, like a neighbor that said she saw him in the adjacent field being chased by a fox, reverberating the spectacle she clearly enjoyed with seemingly little empathy for the theatrics that it ended up creating.

I too would be better off not to reminisce the torment of auditory perception without any clear visual clues, leading to days long sweat inducing labor trying to dig him out of an assumably collapsed system of snake corridors in between those huge rocks only to discover his clumsy irregular whining as a matter of fact came from above, from this *#** tree I would in the following days get to know each and every bloody branch of, tragically close to the spot on the road where his brother got killed last year by our mailman who is as scarred for life by those terrible seconds as we are by its consequences, including Saffron, judging on his haughty stares and the many cold shoulders given during our countless incoherent efforts of trying to get him to come home.

Those bearings and the impudent prospect of losing another one of my darlings right under our very eyes still rivet like this bombastic bass of catastrophic calamity, as if our local tree surgeon Nick Jackson’s heroic rescue did not happen.

This is where sleep arises and watching them, succumbed in trust, cleanses all these fears. 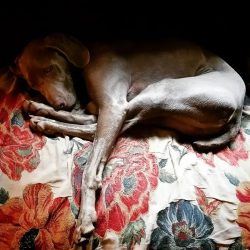