A Strong Association With Bohemian Culture 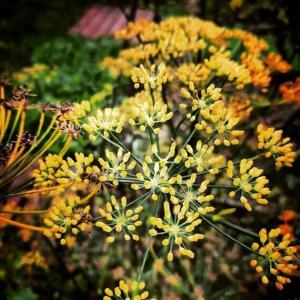 Those of you who truly know me, loosely addressing that rather uncomfortable veracity of being blessed with thousands of ‘followers’ who only and narrowly know the fractions of me that I’m willing to share here, bravely boasted into this thought up stereotype of a gabbling gentle giant whilst hopefully emphasizing mostly the gentle bit, or at least that’s a legacy I aim to forever preserve, will not at all be surprised when I confess that the still copiously flowering fennel in Les Pierres’ veggie garden, against all odds withstanding whirling into wintery waste, to me represent a tribute to a wilder past I fear not to string along with too.

I am not trying to provoke anything but an insight in how my eyes connect to this brain, stocked with memories. If only those echos would have been as present as they are today, I would have never have gotten myself into the embarrassing situation of being the origin of an out of hand bar fight mimicking a comic strip, not being a gifted dancer but why not try when there’s attractiveness on the dance floor, married as it turned out, hubby in answer causing stools to fly around and guests fleeing but by that time me and a friend were just enjoying our beloved drinks, engaged in conversation. Nor would I have ever ended up in a picturesque Spanish alley, artlessly making out with the local most extravagant transvestite, no evil estoppel meant, obviously.

That particular holiday things were bound to go south anyway, with enough dramatic ingredients even without my eager embroilments: friendships on the verge of collapse and buried love interests tagging along intensely, but for the most part unconsciously. Even the location, Sidges, gay Sodom and Gomorra for some but a cheerful, innocent furlough for others, played into my playbook back then, finally single again but not completely freed of that stifling bond.

Absinth, with its holy trinity of wormwood, anise, and fennel, la fée verte or green fairy, is a spirit with a strong association with bohemian culture, explaining me being drawn to it as flies to, I don’t know, something dirty. It’s rather telling that looking at flowers makes me think of booze, wouldn’t you say?