A powerful addition to this emerging euphoria 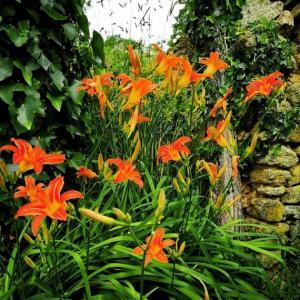 They may be the most carefree of all flowering perennials, growing ever so quickly and are amazingly long lived, thrive in almost any type of soil, will grow in sun or shade, and are rarely troubled by insect pests or diseases. Known for their toughness, our daylilies also dazzle with their big, colorful flowers. Their bloom has just started, midsummer, with new orange blossoms opening each day, yet I’ve been so focussed on getting things done elsewhere, I’ve nearly missed its first array of a spectacle I should be identifying with, or at least following its lead.

Beauty here is so all-pervasive at the moment, regardless of the incessant showers and cold weather, but it’s not just the wicked having trouble finding rest at Les Pierres, but also these gentle giants who are trying to get a grip on all that went down in winter: the roof has been fixed, the chimney repaired, a liner is placed for the wood stove, well, almost that is, because there were some unexpected complications, including an almost collapsing wall in our living room, who’s cry for attention manifested in an answer by turning it into a feature.

We dream of also putting in a new septic, but chances are that will have to wait quite a bit longer as there seems to be a huge waiting list all around, gradually acknowledging the persistent rumor home sales in the region exploded because of the covid lock downs.

I personally love this time of year, when somehow it seems to get so much easier to take control of daily chores, literally opening doors, as if nature has lifted the do-not-disturb signs it had to keep up to be able to prepare in silence, but now its outward is devouringly dazzling and so much more detailed than a few weeks ago.

As a powerful addition to this emerging euphoria, Ivory suggested to henceforth outsource the mowing of our lawns, an idea potentially viable enough in itself to make me jump through all kinds of liberating hoops.

We had our ten year wedding anniversary last week. Descrying his eagerness to please me and how it clearly hasn’t flaked one little bit easily competes with every single flowering daylily in our frontyard, even the ones not yet fully open, promising.