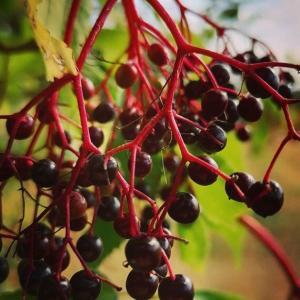 When it comes to the Sambucus bushes that border our beloved property, there’s no judgement in being more drawn to Pagan as opposed to Christian storytelling, other than my desire for positivity and the magic living up to their beauty. Both the flowers, impatient to burst into bloom as soon as Spring pops out, as their berries, casting an early Autumn shadow on high Summer almost to remind us that change will inevitably come, offer countless opportunities for my cooking creativity to flow, so it’s no exaggeration to claim these are the true pleasure providers of Les Pierres.

I have no interest in questioning whether Judas Iscariot indeed took his own life by hanging himself in an Elder. Indeed, the simultaneous and abundant presence of Honesty, which is said to descend from the unscrupulous silver pieces he dropped under his gallows while doing so, gives some credibility, at least to how things were perceived through Christian eyes. The famous playwright Shakespeare took these beliefs even further and suggested that the cross they nailed Jesus on was made from its wood and associated ‘the stinking Elder’ with grief.

For me personally however there’s no pressing protest not to focus on the more favorable features also attributed to Elder, like warding off the devil and witches and invoking blessings, offering protection by planting them close to one’s home and exclude bad influences by hanging its twigs, collected just before midsummer, in doorways.

While researching more of these stories to explore the strong connection I have always felt with this foliage, it was indicated somewhere that ‘a person born under its influence would be blessed with a fertile imagination, could create something beautiful out of anything, would always feel wealthy, even if they owned little, and would be happiest when caring for others’.
Because I am Dutch and consequently notoriously restrained in self-image, I hesitate to admit that I recognized myself in these lofty characteristics. This I can tell you though, I’m more motivated now than ever to start the time consuming harvest.

Also consider reading  All that is part of my aesthetic being 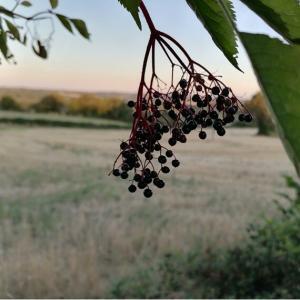