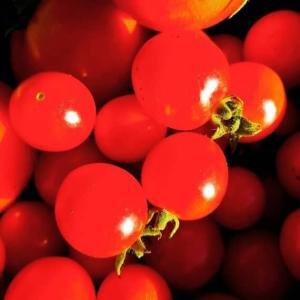 There’s probably something rotten in the state of Denmark, but I’m happy to communicate it’s not our tomatoes. Not only are we in France and not in Scandinavia, the plants providing us with their delectable red fruit seem to be happier this year than ever before and their promise of a copious harvest already materialized when we started picking two days ago, resulting in the tastiest pasta dinner in months. There’s nothing quite like home grown fresh tomatoes to motivate you to keep up the good work, knowing there’s so much more to come.

I find this term of endearment ever so appropriate, not just because of their color but more specifically because of the parable in their decay. When love spoils it really spoils and tomatoes have a tendency to follow down the same path, rapidly spiraling out of control. Going bad their texture changes from firm to mushy, making them ostensibly attractive for throwing around to express our disgust and contempt, metamorphosing love into its counterpart.

My own background in theatre makes me want to still praise them for the part they played in The Tomato Protest, being the perfect vessel for the loud and disruptive reaction to established acting traditions in the Netherlands in 1969, thus creating a much more diverse stage for my own career later on. Since 1994, The Dutch Socialist Party has been using the tomato as their logo, again referring to protest and resistance against institutionalized powers. A different approach is taken in the East of Spain, in the Valencian town of Buñol, where yearly the festival La Tomatina draws thousands of participants into the narrow cobblestoned streets throwing tomatoes and getting involved in a tomato fight purely for entertainment purposes.

Obviously there’s many more examples of the proverbial passion this fruit invokes in us puny people. We promise not to make a mess of it this year though.