Day one in the palissade 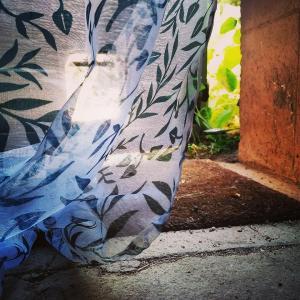 “I feel naked between these nude girls”, she lisped, circumventing her changed reality in a way I’ve only ever seen and heard my mother do.

It was day one of her being locked up in the prison that became her forever home because we, her loving family, failed to offer her a safe alternative after Alzheimer moved in, day one in the palissade where ordinary living is not allowed unless it’s wrapped in diapers and obeys a repeating schedule of invasive rules and regulations that benefit no-one really, but is persisted in nonetheless.

My mother would never use language as a shield nor as a weapon but her words did create bombastic banners, designed for a guild that was destined to rapidly become redundant, serenely soliciting an urgent need to document for posterity, a job my sister and I took very serious for the longest time, being the actual posterity, or at least half of the intended crowd.

I cheerfully cherish many of her heartbreaking yet convincing statements about the confusing chaotic mess she indivertibly found herself in (“Time has fled, yet somehow I do not ever expire”), the obsession with the constant cleaning up going on around her (“As long as you don’t throw me away because I’m already gone.”) and the fraught analogies keeping her afloat in that swirling mass of her life (“Your hand is actually my hand and it remembers everything”).

Her gaze gradually sharpened to details in the distance, seeing bugs everywhere, mostly sweet and tender ones, deserving of one of her personal salutations, infallibly impossible to keep to herself: “Bye, ant. Good morning, wings.”

This is the inspired lightness I seek when I lock myself into Les Pierres’ catcave to write and hide, at random order. Child, brother, wife, father, daughter, husband, mother, sister, son – closeness, that’s what I am perpetually taught: “Now listen carefully. I’m not here. But we are us. We have agreed on that.”