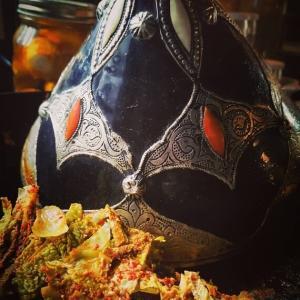 It’s the start of the holiday season, traditionally commencing in Holland today with Sinterklaas, a present extravaganza supposedly for children but commercially exploited and extended to adults, with the predictable but nevertheless truthful excuse of social gathering as the supercharger, obviously impossible now but there are sophisticated and modern ways around that, even in old fashioned Les Pierres.

This is why we’ll be in front of a screen connecting us to the family tonight, participating in a fully organized online festive bingo, with no excruciating to-do-and-to-buy lists upfront and only the bill to pay afterwards. No, not exactly the same, but I won’t be the grumbletonian. The fearful circumstances this year have sparked an acceleration in the demolition of racist aspects of this celebration, a long overdue and hopefully lasting improvement.

Tomorrow would be the start of the big scramble up to Christmas, no decorations ritually allowed in before December 6th and to lower our expectations my mother would stretch that date quite a bit longer, however sensible a habit I never reciprocated. Would be, because we decided against any, for the second year in a row.

It was grief over losing Fos that drove us out of our cottage last year into a century old abbey of a friend, as if any change of scenery could erase his lasting reminiscence, but who could blame us for trying. This year, in phenomenal contrast, it’s the presence of impetuous new life that will keep the delicate balls and bells in storage, without any complaint from me, apparently such a novelty it made Ivory sigh that maybe one or two wouldn’t hurt and his firm believe up until now has always been that all decoration is futile and a nonsensical use of time and resources.

I’ve managed quite well over the years to work around that nonsense, with great successes to look back on, but the years of partaking in the exuberant chateau celebrations and the incline to immense emptiness it procured in a non-negotiable way, has moved my fondness for bling bling towards a more hands-on approach, like cooking our favorite and traditional winter stews in our fancy Moroccan tagine. Just as festive!

PrevDaily Reality, With Or Without Its Magic
Triggered by the colorful spectacle of these poisonous beautiesNext