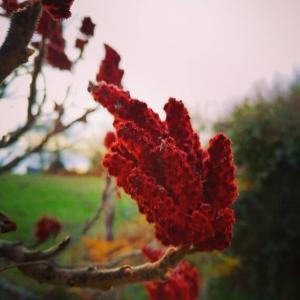 All the magic aside, if only for the sake of argument because why else would you, it’s really not worth considering our surroundings as anything but typical French countryside, small scale farmland marked through ages of similar activities and exploitations, beaten down supposedly for common human interest, but indestructible in its returning beauty and grandiosity, thus sort of autographing the French self-image as depicted in the national anthem: “Peuple français, connais ta gloire, couronné par l’égalité, quel triomphe, quelle victoire, d’avoir conquis la liberté !”

Freedom surely is what we feel is embracing us on our daily wanderings, discovering new pathways to explore and enchantments to devour. Gallivanting the ambience that encircles us, because of the Covid restrictions, has convincingly replaced our natural desire to travel, maybe not in a forever kind of way, but it keeps us content and grounded for now and has enforced a bigger respect and sense of responsibility to restrain ourself appropriately for when the urge to go beyond resurfaces. Besides, on the days we are openminded enough to imbibe some details more profoundly, we find so many references to places and cultures from all across the world, congregating into this infinite entanglement of consciousnesses.

Also consider reading  There Is Something Compelling In The Question Itself

Admiring yesterdays sunrise returned the spotlight to the Staghorn Sumac, also known as Velvet Tree, both names directly derived from from the dense, reddish brown hairs which cover the stems of this plant in somewhat the same way as velvet covers the antlers of a male deer.

Here mostly planted for its ornamental value, Native American tribes smoke its leaves and berries, mixed with tobacco and other herbs. The tangy citrusy taste also inspires a pink lemonade made by infusion, still rather common in North America, but I myself am mostly drawn to the Middle Eastern cultures who prefer sumac to lemons or vinegar, drying the graceful plumes into a spicy powder, using it as flavoring and color enhancer for salads, humus, meat and fish dishes, keeping it in shakers on the table to season their favorite foods, in much the same way we use salt or pepper.