Previously Made Mental Imprints And A Rather Vivid Imagination 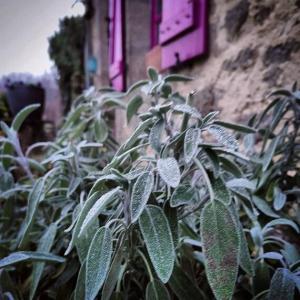 Me rambling about an inkling of clarity still to come has quite illustratively resulted in a day of freezing fog at Les Pierres, making me forget the little cat cave window has always been opaque anyway, so my outlook today is cheerfully unchanged, no matter the marauding thugs that were storming a Capitol elsewhere in the world.

Being surrounded by beauty that is visible even when it’s not, because of previously made mental imprints and a rather vivid imagination, can be uncannily soothing and panicky alarming at the same time, rendering one thoughtless and inattentive of non imaginary threads. It’s been years for instance since we locked our front door, entirely following our own sense of security, but saying that out loud on the internet is probably a brisk and solution-oriented way to change that incautious habit.

We like to spent some of our evenings in wintertime binge watching tv series and it so happened that last night, just before the shit started hitting the fan in Washington, we were finishing the final episode of ‘The Americans’, an excellent albeit elongated epos about Russian spies pretending to be a middle of the road American family during Reagan’s reign in the eighties.

The push notification about the Trump insurgency caused an absolute alienating interruption, that got even more embroiled when we turned on the news and heard one of the president’s supporters declare that the rioters were in fact left-wing antifascists, Antifa in disguise, destined to make them Deplorables look bad, a theory too far fetched for phlegmatic me to comprehend yet probably foolishly embraced by many.

When we first moved here years ago we were amazed about the decisive decline in time, as if life had stood substantially still. Overtaken by the serenity of it, I now often feel completely reversed, like the world has stopped and caught itself in these terrifying images I need to cleanse myself from.

Although I’m not exactly the smudging type, our front yard occupying Sage might prove to be a beneficial spirit anyway, not just for its beauty and taste but for its associated Native American cultural tribal practice. Seems only fitting for a foggy day.