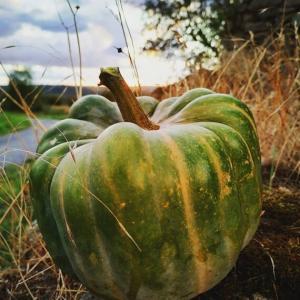 Yesterday’s surprising find of a decent sized squash, after we assumed all had been eaten at by pests of some sort, provides reason for a story that to some extent refers to he who’s name shall never be mentioned again, not for the first time this week, thus hinting towards unresolved feelings, conceivable and without a doubt rightly so, but I will ardently repudiate them nevertheless.

Scientists exploring the western slopes of the Andes in northern Peru have found seeds of domesticated squash from almost 10,000 years ago, about twice the age of previously discovered cultivated crops. In addition to its important nutritious role, the dried gourds were also used as dance rattles in some Native American tribes, and squash blossoms were an important cultural symbol and artistic motif. It seems reasonable to turn to their legends to uncover more about its origin, doesn’t it?

Texan Indians believed in the existence of a man who from his boyhood had always tried to find out secrets that nature kept from them, wandering from tribe to tribe asking questions, looking into the stars wondering what made them twinkle. He kept thinking all his life, until he became known as a very wise man, with an exceptional big head from all the wisdom it contained, that lost all its hair as it seemed to grow bigger.

When the old man had not much longer to live, his tribe worried about all this enlightenment going to waste so they send their shaman to perform a rite, touching the man’s big bold head with his long fingers and muttering magic words. Strange things happened. The wise man’s body began to shrink as he slept, and his arms and legs began turning into stems and leaves. His big bald head took the shape of a squash, forever ensuring a lasting knowledge retention for his tribe.

Let’s not make a huge thing of my proneness to factual and fictional entwinement: I have never actually been physically attracted to baldness and clever wouldn’t be the most glaring trait describing him who shall never be named again, on the contrary. Not downplaying my then feelings by attributing them to youthfulness, I’m more than ever looking forward to making soup today. Or shall it be ‘askutasquash’?