Really apprehending the overwhelming capacity of the color itself 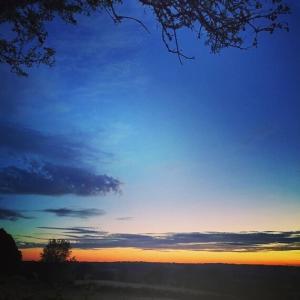 It dawned on me the other day, transubstantiating yet another sunset with Ivory at Les Pierres while recovering from a weekend of energy guzzling children’s visits, how much I’ve actually missed feeling blue, but not in a melancholic where-did-my-depression-go kind of way but really apprehending the overwhelming capacity of the color itself, clearing my canvas for the entrance of previously praised angels and their alluring magical realism.

We’ve spend months being totally focused on everything green and what it had to offer us in terms of food and comfort, only to be sidetracked by the gratifying torrent of extravagant flourishing profusions, which by now you are very aware in our case means an overdose of infinite pink in all shades and shapes, with some purple, red, yellow and orange forays, but little blues. It is not so much the absence as the impenetrable obscurity of it, obviously framing the sun in our summer skies, but without fail putting the spotlight on the latter, consistently claiming a supporting role.

I never paid much attention to this assumed subordinate bit of blue in my summers before, mostly because its glory and its importance is so lavishly sung by others in general, so I’m prepared to embrace this as a highly personal abnormality. My empirical true blue and the intense feeling it triggers in me, is located more towards the darker end of the spectrum anyway, with stormy skies and raging waters usually arousing notions of emotional energy, intensifying strength and reinforced spirit.

Much of the good stuff in my life pertains to this kind of blue, like my all time favorite painting, Picasso’s ‘La Vie’, that I was willing to travel very far for just to gaze upon and spend some time contemplating, but through a fortunate coincidence of circumstances got to meet elaborately in the Musée d’Orsay in Paris a few years ago.

Trying to pinpoint my devotedness, I of course cannot erase the eminent, never to be overestimated skills of the artist concerned, but summery exhausted sinking in the night the other day, retrieving blue and what it can do predominated.