The Enchantment Free To Gather 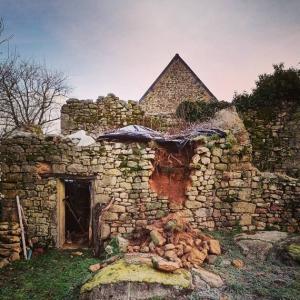 Regardless of the devastation found, the horror felt, causing Ivory to curse out loud Saturday when he beheld nature’s reckless rampage and its violent ramifications to a beloved ruin, no wrecking- or cannonball were involved in steering our dream of what once was and hopefully will be again some day into another direction, another timeframe, or both, because one thing is clear: after the universe spoke to us yet again, our current mindset of doing nothing doesn’t cut it anymore.

If this was a first warning sign given, I would have probably been as shocked, but instead I heard myself explain to Ivory this was bound to happen, so not unexpected, even though I don’t have an answer to the obvious ‘what now’, other than basically securing its safety, something else I actually don’t know much about. With all the preceding disasters still not properly digested, the sight of this new moroseness should be just enough to take me over any edge, but instead I recognize winter’s bareness, death, but with the ancient walls still breathing enough to erupt, leaving us here in the cold, but never really.

Both our visions for Les Pierres have always been about the magic it already entails by itself, the ambiance built up over the years, the enchantment free to gather for whoever opens up to it, whether it be in real life or virtually, digitally, never so much about the devilry it could easily morph into if one starts to think about things along the lines of guilt and shortcomings.

In dreaming how to move forward we’re always trying not to give too much attention to should haves or could haves, the past rendered futile when it comes to things to come. However, this general concept of trying to live in the now has bumped into various potholes along the way because of Covid and its imposed halt, waiting for everything to return to normal, providing all these excellent excuses alongside for delaying just about anything.

Sad for the wall that stood relentlessly for so long, it’s crack instantly invoking lots of memories of admiration, mostly returning from dog walks because, well, it is in that view, I withal recognize the final answer to why it has been raining so much lately.