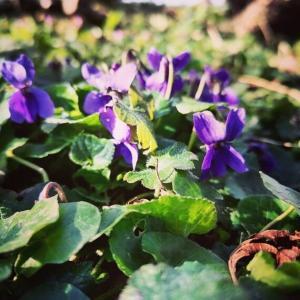 It’s kind of funny, and it might be my twisted, disorganized vocabulary, but when you nowadays Google ‘position determination’ the winning answer will probably involve GPS, which is not what I was actually looking for and is thus underlining the level of being lost in translation when it comes to the role of technology in our day to day life, because all I was concerned with was whether or not these impressive Viola Hirta, suddenly populating all of our lawns ostensibly because of the reappearance of sunshine, are here because of the content of our winter plant pots, that we, as we always do, filled with garden pansy.

I’m not being very existential about it, just aware, they seem to take over more and more. It’s never a competition, trying to be involved in whatever grows at Les Pierres, knowing very well that if it was, we’ll lose, no doubt. In formulating a vision for it, deciding if it’s what’s there that should get priority or what’s needed is a first step, to be filled in with whatever’s happening along the way and adjusting to whatever it means, which is usually related to its beauty. I would have never noticed these little purple dots if it weren’t for the absence of most other flowers and my wrong assumption that Spring is colored yellow, always, with some whites for its innocence.

One of the first movies Ivory and I shared a deep affinity for, probably lead by the appealing soundtrack that we embraced to be partly about us and the personal desires that were driving us apart at the time, was about the life story of Chris McCandless, an American hiker who sought an increasingly itinerant lifestyle, written down by Jon Krakauer and turned into a film by Sean Penn, and his journey Into The Wild. Nothing of the rawness portrayed truly entered our reality of living in rural France, as rural as it gets for sure, but cultivated to the max at the same time.

Our beloved wild, come to think of it, is too often related to our laziness in taking charge, something I used to feel bad about but have learned to judge on its clearer merits. Our real deal doesn’t linger so much in doing, but excels in observing. To always look closer, I recall.

Also consider reading  Get accustomed to this stripped down life