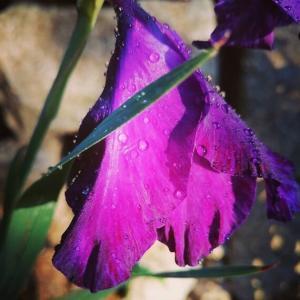 Truly fulfilling happiness, the kind that duly finishes fairy tales favorably, more often resides in the smallest of corners than occupying a center stage, making it difficult to detect yet undemanding to detain once divulged, if you can manage to trust the lastingness of its presence and its capacity to withstand great force or pressure without budging.

It’s the stuff we’re all chasing, deliberate or with indifferent detours, when we pretend to have given up on finding it but its pursuit would still be our primary goal, the sole source of self-fulfillment and self-perfection, but too often reduced to a compulsive need for sensory pleasures.

We weren’t supposed to stay for longer than three months in Le Berry, having a disciplined focus on our creative work at the time and babysitting a friends chateau while she was blowing off steam elsewhere, but her return for a full on British Christmas delayed our departure for years to come.

The frequent and usually extravagant parties we quite literally endured in those first French years came across mostly as an outlet against emptiness, sometimes attractive but recurrently prescribed and dull, invoking a pressing why that never received a plausible answer, but were obviously not the main reason for our extended stay, nor for our final retreat under less cheerful circumstances.

Although quite a bit of time has passed since then, we still refer to those days as our fun but formative years, in which we’ve experienced firsthand that a constant and generally pursued mollycoddling does not necessarily equal common happiness. The purport of its popular appeal is mostly in its appearance, a rather stupefying banality come to think of it, but admittedly not without importance when properly and solely identified as distraction or diversion.

I find myself these days regularly exploring the corners of Les Pierres more attentively, in broader detail. Observing our sword lilies die, for example, after having lavishly enjoyed their outward splendor all summer, evokes a totally unexpected but similar sense of vacuity in me, but without any obnoxious judgement. It’s that closer look again, proving progress, making me truly happy.