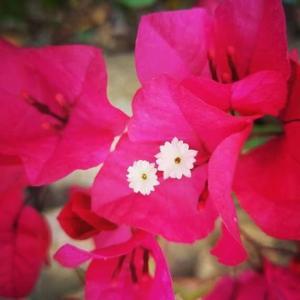 Me being called impractical, impulsive and even a dreamer is likely due to my years of distraction as a playwright and the perks of knowing how to construct drama by allowing a balanced amount of poetic freedom to seep through. Being my own protagonist here surely magnifies my reach considerably, in a good way, by predominantly incorporating my own history and experiences with gained insights.

Having said all this, even for me it’s a strong stretch to get from the blooming bougainvillea on our French terrace to a salesman sunk in dotage in the former Dutch colony of Indonesia and to then rig it up in such a way that one derives its existence from the other.
To highlight my intentions, I better just stick to the facts.

Fact one: Ivory bought this plant last year when it was still tiny at a local supermarket to celebrate the completion of constructing our terrace, unaware of my emotional association with it.

Fact two: My mother spent an important because still happy part of her childhood in Bandung, at that time known as ‘The Paris of Java’, just before her family was to be separated and imprisoned in several Japanese concentration camps during the second world war. ‘To keep longing for Bandung’ would eventually become our family’s aphorism.

Fact three: In search of my roots, I visited my mother’s parental house in Bandung several times, the first of which about twenty-five years ago, trying to find people who would possibly still remember her family. During an insomnia-ridden night I went for a walk, but was soon halted by an old man who wanted to try out his rusty Dutch on me. Long story short, this man used to be a salesman going door to door and through the mist of his memories he recollected selling my grandmother her last piece of fabric that he dyed himself and that she was hoping to turn into blouses for her daughters. When I asked him if he could remember the color, he pointed to a vibrantly blossoming Bougainvillea. “I always used that”, he said.

Fact four: my unbridled preference to link anything and everything together doesn’t hurt my credibility as a chronicler, does it? If so, what you take from this story should just be: pretty and pink.