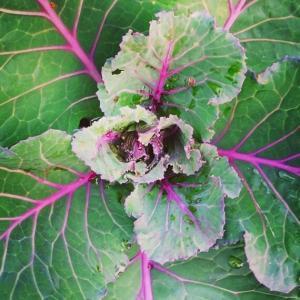 Even on an uninspiring day like today, a master plan involving lots of outside work in need of tackling but unfortunately disturbed and possibly prevented by rain, there’s always something pink luring at Les Pierres to brighten up a slightly somber mood, prompted by rising tensions elsewhere and my unbridled sense of responsibility to engage.
The naive act of viewing one’s vicinity through rose-colored glasses is easy to mock, so I do get that a lot and am not averse to turn to it myself when embracing the perks of explanatory self ridicule to the fullest, out of nowhere laughing out loud being a favorite, but I still prefer those dreamy eye expanders above anything more cynical or down to earth, allowing me to observe details that would otherwise be lost.

No one could have missed this capital letter Pink faithfully running through our veins, perfectly portrayed by the savoy cabbages to be in our veggie garden, hypothetically protecting us from all harm and evil that is so gaudy flying around this Halloween weekend, with an additional deadly airborne agent amongst it this year.

Over morning coffee I read about how the amount of coronavirus a person is subjected to may determine how sick they get, with a reference to Philippus Aureolus Theophrastus Bombastus von Hohenheim, a.k.a. Paracelsus, a pioneer in several aspects of the medical revolution of the Renaissance, emphasizing the value of observation in combination with received wisdom, right up my alley, be still my beating heart, and how the adage ‘the dose makes the poison’ is credited to this illustrious figure, who’s so-called occult reputation remained controversial but his medical contributions were universally recognized.

Never even heard of the guy before and now cleared from other jobs because of the rain, I found a million connections to my own world of thought and even our lifestyle choices, like the intermittent fasting we adhere, of which Paracelsus also believed that it helps enable the body to heal itself, as a physician within.
I share his name here for that reason only, not to obviate more pink mockery or promote quackery, but to celebrate, again, the unfathomable powers of intertwining.

Also consider reading  Which in essence turned out to be true