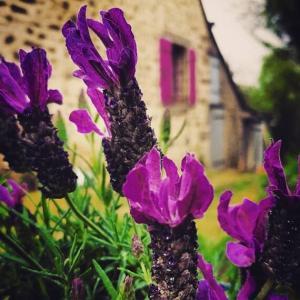 It’s been a busy week at Les Pierres, mornings mostly spend outside doing the much needed and very satisfactory chores that I tend to procrastinate from but as usual gloriously changed our outlook with unbridled optimism and progress, and lazy afternoons of babysitting, because Young Mec is not yet capable of controlling any of his urges, that in some miraculous way all involve destruction and some sort of smeary squalor.

To further colorize this picture: he wasn’t even there when we baptized the just planted apricot tree, a dwarf version guaranteeing easy access, but sniffed out it’s newly presence in our orchard flawlessly and instantly took offense at it, I assume, because why else have a bite out of it when running past?

Our p’tit paradise could never remain a paradise without these disastrous disruptions we are ever so ferociously but uselessly trying to avoid. In theory they should balance all of the misty magical realism I benevolently love to glue on everything that surrounds me with a sharper awareness of the actual threats luring out there, wanting to spoil the fun.

Also consider reading  Having a heart that dwells in activities

These curveballs that life inevitably keeps throwing, as inconveniently but perfectly timed as they are distressing, are obviously meant to teach us a lesson of some kind and because I ordinarily feel liable not to duck, I predictably get hit full frontal by them all too often.

Like last Friday when our neighbors, the ones enduringly constructing that Woesome Wall only recently finished which sparked our hope for a more private solution to our own taste and liking, decided to break the silence that lasted for over a year and that was started by turning their heads ostentatiously every time I greeted them, by expeditiously feigning to Ivory it’s mostly due to my unapproachability they haven’t said anything before but we should know we can’t put anything against their cancerous creation.

In the past I used to be pretty defenseless against accusations like that and I will never pretend not being hurt, but nowadays my ultimate clapback is overly and perspicuously powerful, based in beauty, strictly locally acquired, not to be disregarded by anyone and wontedly settled in pretty pink.

Also consider reading  All my love goes into the creation process