The Enticing Inner World Writers Create For Themselves 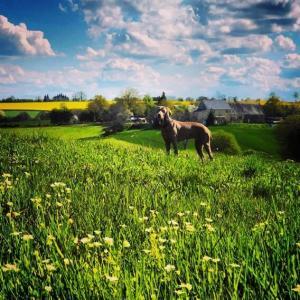 Sometimes the similarities with the wonderland that made a little girl fall into a rabbit hole seem to splendiferously surface at Les Pierres, in all its normalities still the magical place of marvel we stumbled upon years ago, despite the meanwhile well-trodden pathways through the green hills that abidingly inspire us to keep looking outwards instead of dwelling too long in the enticing inner world most writers create for themselves. Having a Young Mec, full of exploration energy, certainly helps too: he is not the dreaming but the doing type, as he keeps reminding us of his needs, the moment he needs them.

It’s been joyful journey discovering his personality, even though his breed characteristics have provided us with massive challenges we were ill prepared for. Sure, we tried to be thorough in our research and stored in our memory that ‘training him should be gentle, because harsh treatment will make him resentful’, but his harrowing eyes instantly changed our gentle giants’ definition of harshness from a guaranteed quality we both richly possess into an unexpected work in progress we randomly and frequently fail at.

The pedagogically sound but rather sentimental poem Speak Gently by David Bates, first published in 1849 presents a helpful mnemonic when things threaten to get out of hand, but it has this inseparable connection with Lewis Carroll’s parody in Alice’s Adventures in Wonderland, where he let’s the Duchess sing, as a lullaby

Speak roughly to your little boy,
And beat him when he sneezes:
He only does it to annoy,
Because he knows it teases.

Fortunately, the great wide open bordering our ‘p’tit domaine berrichon’ bestows an impetus to escape both extremes of this consuming spectrum, be it raving sentimentality or bubbling vexation, enlightened. Even on a misty day like today, with nothing much to see yet everything to gain, but magically hidden under a murky rug so there’s no need to focus on anything but ones self, it fills all of us with a personal joy to go outside for a walk. As many walks as it takes.