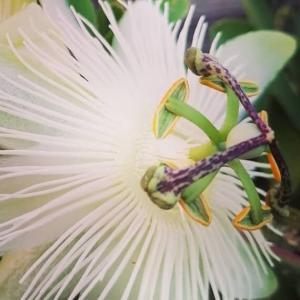 My practical attitude, combined with my inquisitive mind, has often led me to be accused of being too straightforward, too strict in life’s doctrine, Mister-know-it-all-already with an infallible outspoken opinion.

And it’s true, my internal desire for simplicity, for things to be either black or white, has long been part of the compass with which I sailed through life, trying to break down an overload of available information into usable particles that I could store in my brain. Somewhere down the road I forgot to make room for a box containing the probably-never-will-know-and-that’s-okay subjects, which in turn let to my eternal quest for intertwinements, knowledge combinations, connections and explanations.

It’s exhausting, wanting to know everything about anything instantly and I sometimes feel it can’t be very healthy. That thought alone then takes me right back to a girl I once knew, I believe her name was Debbie, who asked her doctor to explain the headaches she was suffering from and got ordered not to ever think about anything anymore because it was her thinking that would make her brain swell up. Much to our amusement, she genuinely believed him and gave up thinking, or at least she thought she did.

Some relief from overthinking the full monty seems expedient though and I get that from just observing the passion flowers at Les Pierres. Their complex architecture, for example, makes it mimic an inexplicable alien with a huge potential for a whole lot of why questions. Seeing a bee enter its florets in search of food, immediately answers all of those questions visually, no thoughts needed.

For me and my mind that never stops, these beautiful flowering vines also house the dualism between religion and evolution theory. Missionaries used it in their teachings to help understand the Passion of Christ and the Crucifixion, but it’s also scientifically studied extensively for its ways of adapting its appearance to fight off Heliconius butterflies, whose caterpillars would otherwise devour the leaves.

I feel this is nature giving the simplest of answers to my obsession with complexity: let it be. It’s either that or Debbies doctor was right after all.

Also consider reading  This new fabric we can share, regardless of the distance 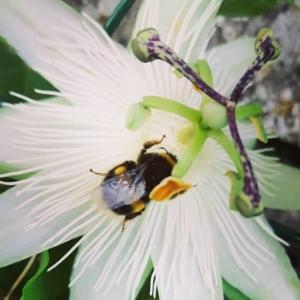 PrevConnecting Reality With Anything Higher To Make It More Special
A pointless message probably, but beautiful neverthelessNext