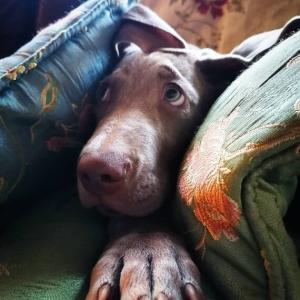 Life slowing down because of our Christmas celebrations, its fervid focus on eating and drinking and as a result its lengthy, sincere conversations, had tired us out considerably enough to aspire an early night yesterday, still in the calm before the announced storm I would only a few hours later blame for the interruption, convinced dogs like children have extra-sensory perception and Mec’s intrusive attempts to join us in bed must have been about that, averse anxiety about what’s to come. Without grumbling I got dressed again and took the feisty little rascal outside to prove to him all would be well, even when these gusts would bring us the change they always seem to forebode, never fear, not even possible damages.

Baby’s peeing, wild winds winding, excessive booze oozing, all must have played their derivative part in the rather restless but not incommodious continuation of the night I mostly spend slumbering, pondering about all clear and topical cognitions presenting themselves naturally, you know, the ones you immediately forget when waking up, or at least their acuteness. They advance their rendering nevertheless, why else would I, over morning coffee, be reading about Ralph Waldo Emerson, the American essayist, lecturer, philosopher, and poet who led the transcendentalist movement of the mid-19th century, vaguely sensing a similarity with our troubled times and the possibilities of a new era dawning.

“(…)the only prophet of that which must be, is that great nature in which we rest, as the earth lies in the soft arms of the atmosphere; that Unity, that Over-soul, within which every man’s particular being is contained and made one with all other; that common heart”.

Our current stormy atmosphere lacks these soft arms, but I appreciate his further idiom and his criticism of the thoughtless conformity of society, gradually weaving me to his friend Henry David Thoreau, deeply interested in the idea of survival in the face of hostile elements, historical change, and natural decay.

On the morning of this third day of Christmastide I therefore sincerely thank Mon Mec for waking me up briskly, bringing depth and background back to wintery Les Pierres.

PrevImproved into something more sustainable
An incompatibility with family lifeNext