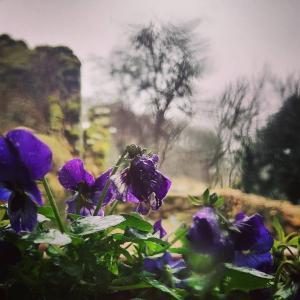 You might conclude the Universe is trying to tell us something and by being naturally inclined not to listen too carefully we are also ignoring reality, the bare one, stripped of all falsely attributed magic that was put in place only to please the romantic fool I still hope to forever remain, but even he must come to terms with the staggering pile of unfortunate events that require serious attention before we end up on a road of no return.

It could have easily been the ill-troubled day we bravely endured, but when Ivory pointed out the loud noise we both registered last night, the one I harshly tried to disregard because we were just stepping into bed, his congenital what-if-anxiety seeping through cautiously, I could not reply with anything else than “Not now”, which in turn caused Ivory to only vaguely report his discovery this morning as ‘something to put on our list’, cheerfully alluding to the partially collapsed ruin wall and its destruction now blocking the entrance to our summer terrace, but on the upside, its seasonal aspect determining its low priority ranking, that is if you have a glass half full mentality, which I am sincerely trying to maintain I do, against all odds.

In response to the fire he thus lit, I reminded him to also write down the leaking of the roof of the cat cave, to which he replied “Oh, where?” and because of my meticulousness and obviously because exaggeration comes strange to me, I answered truthfully: “A little bit everywhere”.

Following this dreadful path, up until now known as the road to nowhere, causing me to completely out of character reach out for help, led to a visit from a contractor friend, who has given us clear instructions on where to start digging, but the apparent change from frost to extensive rain has me paralyzed for yet another day, I’m afraid.

There is something very brutal and almost mean about leaving the structures of Les Pierres to these wild, out of control elements, unattended as if we never cared the way we did, but at the same time I feel confident the love we put in before will account for some relief somehow.

It’s time for Spring to show us some mercy, about time someone told the Universe.