An unexpected but by all means pleasing surprise 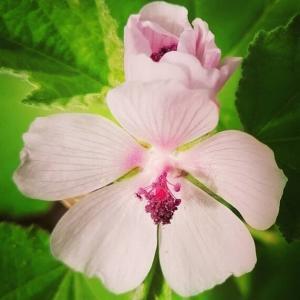 Even for a fierce fantasist like me, who favors beholding the behind and beyond to get a feeling for the present, the sudden appearance of first flowers on the Marshmallow plants sown earlier this year, defying yesterdays strong wind and sweltering sun, was an unexpected but by all means pleasing surprise.

I had not forgotten about their presence, of course, watering them regularly throughout summer, but my vision of lush and overwhelming pale white washed pink blossoms next to the Cat Cave’s door, laced with the little blue star shaped florets of interplanted Borage, proved too ambitious to be materialized pronto. By now my thoughts were already so focussed on next possible floral schemes to erase this years trivial nonsuccesses, that I needed Ivory to point out to me that their initial glory had started.

My enthusiasm for their presence cannot be fully accounted for by their beauty, now on display, however eye-catching and complementary to Les Pierres’ existing color scheme they are.

My ulterior motives this time around do not even focus on its edible usefulnesses, which may come as a surprise to some and I will instantly admit the flowers offer a welcome addition to our salads now that other supplies in that orchestration have dried up. I don’t really fancy making our own Marshmallow candy much though, nor the French version called Pâte de Guimauve, created by mixing an extract from its roots with an egg white meringue and flavoring it with rosewater. We attempt to avoid sugar as much as possible, but I might be tempted anyway if I can come up with a healthier alternative. It’s always silly not to try.

But more importantly in these days of itinerant pathogens is the traditional herbal power that’s even riveted in its family name Althaea, which derives from the Greek word for “to heal”. We have a dear friend who firmly believes she can beat a nasty cough by drinking Guimauve tea daily, made from its leaves or its roots, depending on whether the rasp is worse because the latter produces a stronger concoction.

None of these things actually consciously mattered when I put its seeds in the ground last Spring, but all it took was one flower to open up a world.