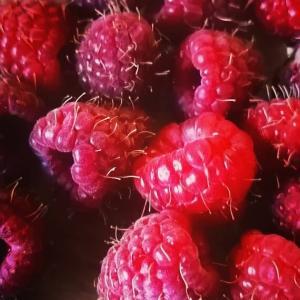 I really don’t want to smear the impeccable reputation of a fruit who’s existence clearly breathes pleasure and positivity, by throwing at it my gruesome connotations that I have no reason to believe transcend my personal sensitivities. Outlandish associations are no strangers to me anyway but my insistence to be forthright and thorough usually overshadows any awkwardness arising from my candor. Also, I have already praised raspberry’s heart of kindness here, so providing some depth won’t hurt its position on my list of all-time-favorites growing at Les Pierres.

Several lifetimes ago when I was about nineteen, I was traveling alone for the first time, only accompanied by my very young Labrador pup, exploring the North of Italy in support of the university study in Italian language and literature I had just started. Cleared up after a day of rain, I took a walk in the dark, uphill, trying not to pay attention to the two motor bikes that seemed to be chasing me and my dog, a hunch at first but slowly morphing through paranoia into reality, shortly after we left civilization behind.

I still have no words that will do justice to the perdurable fear caused by the subsequent extreme violence these bikers inflicted, billowing over us like a tsunami without forewarning, quick and nasty, other than we were lucky to survive it, although, in hindsight, the emotional and physical trauma caused by this torment somehow diminishes that observation considerably. Terror truly rejigs you, even if you manage to find solace later.

I’ve seen glimpses of akin monsters throughout, like when my by Alzheimers enfeebled mother, at her utmost vulnerable because asleep, got atrociously attacked by a psychiatric inmate, beating her innocent face black and blue, the whole ordeal becoming even more tragic in the aftermath, because unaccountable to both victim and perpetrator.

Unconsciously burdened with these issues of detrimental background, surfacing my present world unexpectedly every now and then, there’s nothing too vague about the reminder nature sends us with her red razzies : fragility and ferocity combined bear fatal fruits, unless a Heart of Kindness counterbalances.