This too big of a longing for nature’s budding way 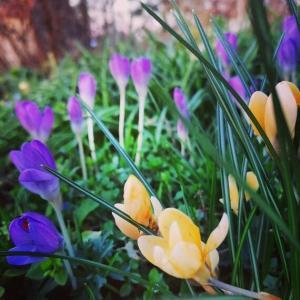 To be completely frank, all I’m writing about here is meant to pay tribute to this road Ivory and I started walking when we bought our tiny pink paradise, a road paved with nothing but diamonds as far as I’m concerned, give or take a few distinct obstacles along the way, but that’s sort of inherent to probing every story ever told, an inevitable urge anchored in both our bloods.

If it wasn’t for the excruciating pain in my lower back, weirdly enough emerging exactly when Spring had sprung the other day, like a silent explosion touching all our other senses, I’d be dancing and burning the darkness away.

I have the utmost respect for Ivory’s meticulous skills as a serious journalist, but his singular source being daytime talkshow host Ellen Degeneres when pointing out that this newest drawback could be Covid related and could mean the vicious virus finally caught up on us, here we go, wouldn’t stick with pedantic me. No, no, this is a just payback for having lived with this proclivity, this too big of a longing for nature’s budding way before it’s actually supposed to.

There’s not an awful lot I’m grateful for in having shared one of my lifetimes with the one never to be named again – put me on the spot and I will deny it all – but his indomitable lust for living forward has been a true life lesson on how not to ever pursue happiness again.

A journey through Indonesia immediately comes to mind, my first personal acquaintance with my mothers roots, so very precious but nevertheless clouded by his constant complaining and whining, if only we could get to that luxury hotel in Bali sooner than promised, which was weeks away. Much of that beneficent Balinese week he was eventually forced to spend fighting a food poisoning I swear I had nothing to do with, nor felt smug about.

I will always chase a life lived wisely and earnestly, but with these crocuses and their perky appearance overnight a milder version of this mindset of imperturbability gloriously emerged. No matter the urgency to get started on the planned maintenance and the other ameliorations deemed already palpable when talked about at our kitchen table in Winter, if and when will do just fine, for now.